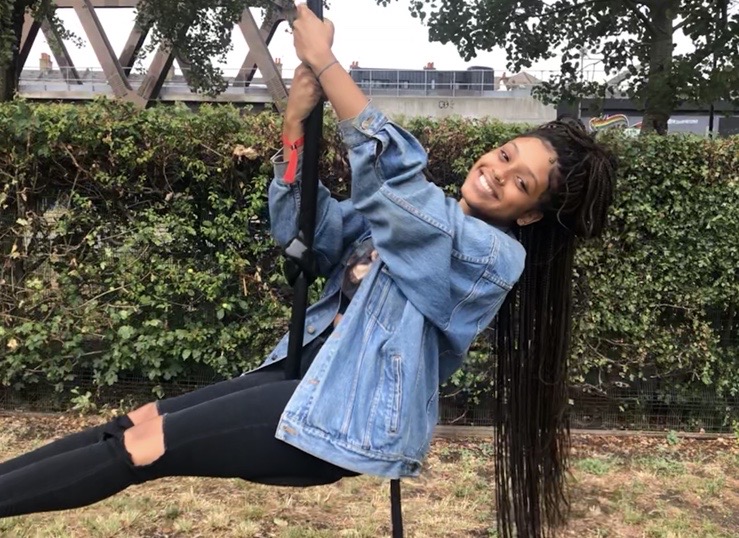 “A lot of times, I feel like when I’m writing and if it is about a black person, I think if there’s no form of suffering involved, then I will only be able to grab the attention of the black community. I think white people only become interested if it’s a traumatic, tragic story, but I don’t want to have to only grab their attention with sad stories. I don’t want to gain attention or gain interest by just making someone feel sorry for my culture.” —Naomi Johnson

A Chat with WRAC ep. 3 Transcript

Naomi Johnson: Like you, I grew up loving to read. I loved books, and I wanted to be able to read a book that a younger me would be able to relate to.

Justice Curry: Welcome back to a Chat with WRAC. I’m your host, Justice Curry, here with Naomi Johnson.

Justice Curry: … a senior in the P2W program. Today, we are going to talk about blackness in writing in English programs and the lack thereof.

Let’s start by asking how many black students do you know in P2W, Naomi?

Naomi Johnson: Counting you, I would say about three girls that I know.

Naomi Johnson: I think that it has a lot to do with not many people liking to write for fun. I mean, a lot of my friends they’re either in accounting or business, not many of them are into writing.

Justice Curry: There is a lack of interest in writing in the black community, and I think it has a lot to do with our lower education experiences when we were in elementary school, middle school.

Naomi Johnson: Yeah, most definitely. When I was younger, I did not like English or Language Arts. It’s very embarrassing to admit, but the elementary school that I went to, it wasn’t the best elementary school. So when I got to high school, I didn’t know how to define a noun or what a verb was or what an adjective was. I had to teach myself that basic knowledge because my primary education didn’t care if I knew or if I didn’t know.

Justice Curry: I’m not going to lie, I still don’t remember those conditions for those things, but English has always been my strongest subject. I remember freaking out at an early age, just trying to figure out what I wanted to do with my life, because I kind of already knew from a younger age that being an author wasn’t going to be a sustainable job for me. I bounced around majors until I just finally realized I should just do what I love.

Naomi Johnson: Exactly, yeah. Yeah, my experience is kind of the same. I came into college knowing that I wanted to write and then I wanted to create things. So my major at first was journalism, but I learned very quickly that I did not want to be a journalist. I think I was speaking to my adviser and she told me about the professional writing major and then I ultimately switched my major to professional writing.

I didn’t really meet anyone who looked like me until the end of my sophomore year. And so I did it. I still loved my major, but I did not enjoy going to class. I will have to admit that it wasn’t… I just always felt out of place. I just felt like the white people really clique up. They all naturally just become friends and talk and laugh, but I never been able to social butterfly. It’s easier for me to speak and be engaged when I don’t feel out of place.

Justice Curry: When you’re surrounded by all white people, there’s not a lot of diversity. It makes it difficult to feel comfortable.

Naomi Johnson: I remember having a group and they were all white. Of course, I was the only black girl. I remember them just skipping over my input and acting as if it doesn’t make sense or it’s not good enough. So that really annoyed me and after that, I stopped trying to interact and add my input when I was in white groups.

Justice Curry: I had a very similar experience in my very first P2W class. We were doing group work and I really just felt like my input wasn’t valued in that I was kind of just being looked over and skipped over kind of like a background character or something.

That kind of leads into the next question. How does the lack of black instructors and faculty members affect your experience within the program?

Naomi Johnson: I might be going through a situation where it’s kind of causing me more stress within the course, but because I feel like the teacher might not understand or they won’t have sympathy, I just try to deal with it on my own and not do anything.

So a lot of times, if I’m confused, I don’t really ask for help because I feel like everyone else is understanding and I’m the only black kid. I don’t want to make it seem like the only black girl in class is the only one that doesn’t get it. So clearly it’s not me, it’s just her. So I just try to avoid, I would say, interacting with the teacher and asking questions.

But, yeah, switching gears a little bit. When I was younger, I was an avid reader. I loved all of the popular teen series, like The Hunger Games and The Maze Runner. But I also noticed that they were all written by white authors. How do you think this whiteness in popular teen literature, popular literature in general, affected how you viewed English majors and writing as a whole, like in your personal experience? How did that make you feel?

Naomi Johnson: My personal experience, when I would go to class, we would only learn about famous white authors or just famous white people, period. I would find myself becoming bored of it, but it just made me want to bring the representation that isn’t there yet. Because I think that the lack of black women in the PW major has to do with the lack of black women in the writing realm period. I think a lot of people, a lot of black women, especially, just don’t think it’s a career for them that they can do it.

Naomi Johnson: A lot of times, I feel like when I’m writing and if it is about a black person, I think if there’s no form of suffering involved, then I will only be able to grab the attention of the black community. I think white people only become interested if it’s a traumatic, tragic story, but I don’t want to have to only grab their attention with sad stories. I don’t want to gain attention or gain interest by just making someone feel sorry for my culture.

Justice Curry: I especially am guilty of doing this when it comes to projects. I just feel like, okay, I know I’m going to grab the attention of this professor, and I’m going to get this grade if I talk about some of the struggles that I go through as a black person, or some of struggles that black people go through within the community.

Naomi Johnson: It’s like we have to tone it down in order to get the good grades. Because if I wrote a paper about why black people are so amazing and influential and basically are the foundation of America, I would probably get a C or maybe a B, and my teacher would probably feel like it’s too biased. But I just don’t understand why I can’t be biased when I’m talking about my culture.

Justice Curry: Yeah. Actually I had an incident with a professor and this was not a P2W professor, but where I was making a paper with certain guidelines that basically revolved around my childhood and some of the things that were a bit traumatic for me. While they were editing the paper, they were, like, “I want to know more about this, and I want to know why this happened and why that happened.” It’s, like, dude, I’m already digging into something that is traumatic as it is. Why do I have to put my trauma into my work in order for it to be considered worthy?

Naomi Johnson: Or interesting or informative.

Justice Curry: Or interesting, exactly. What do you wish that you saw more of in terms of arts and literature when you were younger?

Naomi Johnson: I wish that I, for one, had a black woman as a teacher in the PW class. I mean, I’ve had teachers of minority, but I have not yet had a black person for a teacher at all. I don’t even think I’ve seen one around, that being one of them. I really would like for teachers to acknowledge that the curriculum that they are teaching us, don’t really involve many famous black writers. I think, lastly, I would like to see in classrooms more black people, students.

Justice Curry: Getting more black students in P2W, I think it starts with us having this conversation now and just letting people know that there is a space for black writers and black creatives, and that you won’t be alone if you do decide to follow this path. Because coming from being a business major and having so many black students, to going to a smaller major and just being one of a few, it was difficult. I’ve definitely found it very difficult to form bonds and find friends within P2W because of this.

It’s also a part of the reason why I really was hesitant to leave the business department, too, because I knew coming in that I was going to be a little bit lonely. I think if we can just kind of form our own community and let people know, “Hey, you’re not alone in this.” Even though this is a predominantly white college in a predominantly white major, you don’t have to do it by yourself. I think on that note, thank you so much for joining me for a Chat with WRAC.

Naomi Johnson: No problem. Thanks for having me.

Justice Curry: Thank you so much for listening to a Chat with WRAC. You can follow us on Instagram, at Chat with WRAC to leave us feedback on this episode and suggestions for future episodes.

In solidarity with Black Lives Matter, I am creating a safe space for black students within the WRAC Department to discuss our current political climate and to offer support within the department as a whole. If you’re interested in assisting me in this creation process, follow our Instagram at Chat with WRAC for more information. Thank you, guys. Have a great day.