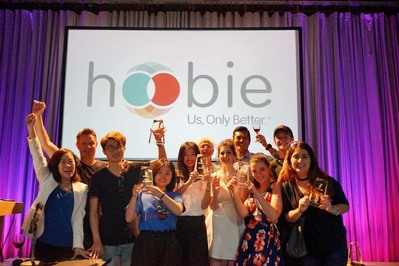 In spring of 2017, Professional Writing (PW) student Eric Flewelling expected a normal semester. He was a few classes away from wrapping up his double major in Professional Writing and Advertising and searching for opportunities for the upcoming summer. Then, something amazing happened that changed Eric’s semester entirely: One of his professors nominated him for the Minds Wide Open competition.

Minds Wide Open is an annual international advertising competition that partners Michigan State students with other students from around the globe. This year’s competition centered around developing branding content for the upcoming app, Hoob.ie. The competition gave Eric a chance to gain real-world creative experience while working with a team of students from China, South Africa, Mexico, and other countries.

As a dual major, Eric had the opportunity to contribute to his team in unique ways. “A lot of people on my team were great at executing ideas,” he explains. “Some team members were even in majors like animation or engineering. The problem was that a lot of them didn’t have much experience with concept generation and focused creativity. In that way, I was able to use my professional writing skills to look at things from a rhetorical perspective and find the best way to connect the content to the audience.

Eric’s team worked five consecutive, long days—between sixteen to eighteen hours—to develop their plan for Hoob.ie. They moved past language barriers and technical difficulties to collaborate and compromise. By the end of the week, they had won a spot in the finals, to be held at the One Show Greater Innovation Conference in Shanghai, China.

“It had been going through our minds, ‘Wow this could be a possibility!’ Then we got the call. It was really exciting,” Eric says. “I’d never been outside of the country. I even had to expedite my passport,” he laughs. “It was chaotic, but it was definitely worth it.”

The team flew to Shanghai on November 1st, 2017. At the finals, they competed against other international teams to design a campaign for Chevrolet. The members of Eric’s global team—who up to that point had only collaborated via the social media app WeChat—finally got to work together in person. The team ended up winning the silver award at the competition—an impressive achievement!

Eric himself learned to be more confident in his skills and to communicate more effectively. He also gained a love for travel. He says the most rewarding part of the experience, though, was the exchange of ideas and collaboration across cultures. It presented challenges and opportunities that the team worked through. For example, the cross shape of the Chevrolet logo is often used in hospitals and ambulances in China, which may connect to negative emotions in consumers. The team had to navigate these, and other cross-cultural issues, as they created the Chevrolet campaign for the finals.

“I realized I’d always seen this one way when someone on the other side of the world has always seen it in a way that’s entirely different,” Eric says. “That sounds kind of simple, but it was amazing.”

Eric graduated in December 2017. He looks forward to working with a Marketing or Advertising company, where he can continue to develop his professional writing and advertising skills. His Minds Wide Open team is still close, and they maintain regular contact via Facebook.

Writing the Next Chapter for Spartans

Alumna is a Pioneer of Co-Working Spaces in Detroit